I Do Not Heart Harry Potter

My apologies to all you Warthogs (or whatever you call yourselves) out there, but I'm going to say something which might shock you: I do not heart Harry Potter. That's right. I said it. I'm not a fan. I didn't read the books (yes, I know they're SO good and I HAVE to read them and they're so much better than the movie. Whatever). I don't count down until the movies. I don't own a striped yellow and maroon scarf that goes to the floor. I don't dress up as Harry for Halloween. While it's true I've begrudgingly seen the movies (at least, I think I have), I couldn't recall one thing that happened except for that scar on his head. That's it. 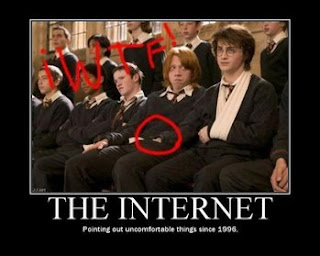 Much like the Twilight phenomenon (which I *still* haven't read she says with some glee), I'm not jumping on this bandwagon. Sooner than later, this will pass me by in a heartbeat and I'm OK with that. I don't need to see it. I don't really care. I'm excited for my Harry Potter friends to see it tonight (you fly your nerd flags high!), but I will be sitting this one out. Have fun, muggles (oh, crap. I do recall one more thing).
Posted by Pinky Lovejoy-Coogan at Tuesday, July 14, 2009

That last sentence seriously made me laugh.

I honestly felt the same way about Harry Potter. I didn't want to like it, it sounded stupid. I didn't want to be in that group of people who are crazy about it. I was forced into seeing the movies. Then I gave the books a try and fell in love.

And now I'm sitting here tired as can be because I went to the midnight showing of the movie last night. And loved every minute of it ;)

Give it a shot, I bet you'll like it. Twilight on the other hand. Who cares?! :p

How funny! Me neither! I have not SEE ONE MOVIE! LOL! I have no desire!

If you're not going to read the Twilight books, can I have them back?