This past weekend Keith and I went to Wal-mart for a few quick things. As there weren't many lines open (except the self-service one, which I refuse to use out of principle alone), we were forced to wait in a "Speedy" (I use this term loosely) check-out line. 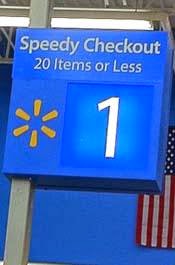 Now, I'm not sure what Wal-mart qualifies as "Speedy," but I can assure you that this line was anything but. 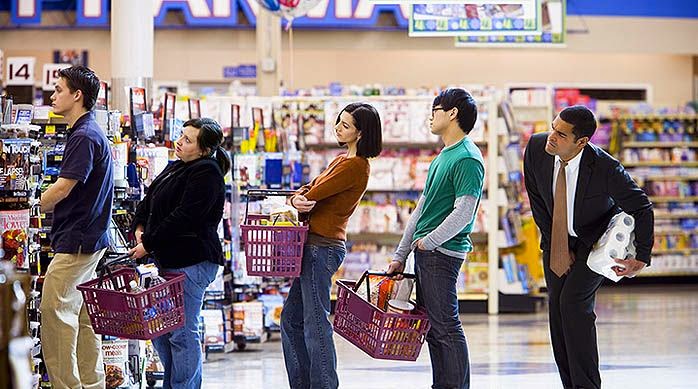 What made it worse was that the couple in front of us had - and I'm not even exaggerating here - at least 50 items. Now, granted, I'm under a lot of stress right now. We're moving, I was out of bed when I should have been elevating my blood poisoned leg (long story), and I felt like crap. I get that. But, it doesn't excuse the fact that those people were RUDE and took up far too much of everyone's precious time. 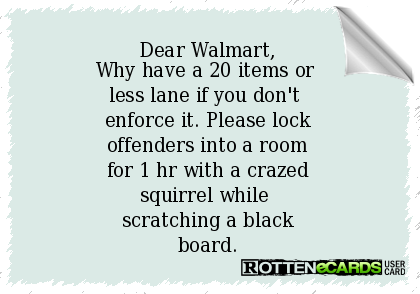 Apparently, Wal-mart doesn't really care. I'm not sure why they put a limit on the sign, because the "rule," as it were, isn't enforced. Anyone can take 50 items up with ZERO consequences. When I said something (because, let's face it, I was completely unable NOT to say anything at that point), the a$$hole said they were paying separately. Um, that still makes it 25 items for you both, so, no, there's no pass for you. Then, he said, "God bless you," which just infuriated me all the more. Stupid inconsiderate dickheads. Stupid uncaring cashier. Gah!
Posted by Pinky Lovejoy-Coogan at Wednesday, June 18, 2014