It's no secret that I've long since wanted to meet Michael Fassbender. He was #1 on my "Bucket List" of celebrities to get a picture with - I've been DYING to meet him! Now, it's true I did see him one time before, but he shot me down (and broke my heart), so I had to try a new tactic this time. 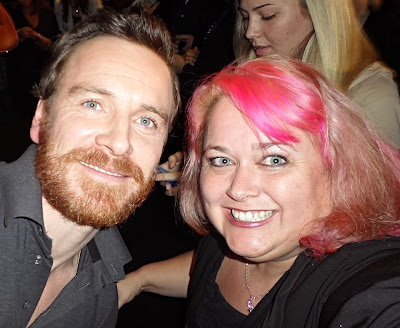 My amazing husband, in his infinite wisdom, RSVP'd for us to attend a screening of 12 Years a Slave followed by with a Q&A with Michael Fassbender himself on Saturday. I was THRILLED! As the day approached I nervously planned on how I'd get his attention, finally settling on the same method I used for George Clooney - I made him a scarf. As he was scheduled to be at Sundance, I thought this was only fitting. Although the movie was amazing and the Q&A was equally great, my heart was beating quickly the entire time as I waited anxiously for it to end and see if, possibly, hopefully, he would stop and take a picture with me. The SECOND it was over I was on my feet and ran to the stage. "Michael," I said, "I made you a scarf for Sundance." His reply, "Oh, thank you. Unfortunately I won't be able to attend Sundance, but it's still cold in London." I then asked him if we could get a picture and the result is shown above. 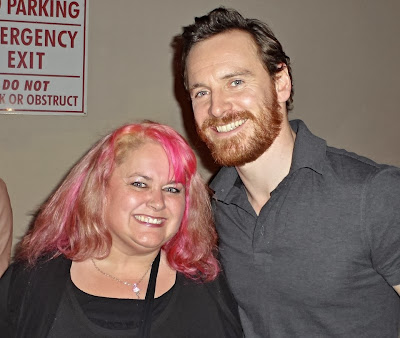 I was SO happy. Still, I thought the picture could be better. Luckily, when he left, I was able to get another picture with him - and Keith even took the picture! It was so cute to see how excited Keith was to watch me get my long-awaited picture with "Fassy." It was adorable. He's such a great support to me. Bucket list item....CHECK! :)
Posted by Pinky Lovejoy-Coogan at Tuesday, January 14, 2014