It's a Miracle (Part Two)

So, I've been meaning to tell you about this all week. That is, my epic battle with the U.S. Postal Service.

Now, it's not as epic as it is just silly, really. You see, it all started with Groupon. Yes, Groupon. I may or may not be totally and completely obsessed with Groupon, but that's neither here nor there. Anyway. One day I was perusing Groupon, as I do every single day of my life, and I came across this amazing throw blanket displaying the SF Giants as the 2012 World Series Champions. Now, you probably don't know this, but Neverending Boyfriend is a HUGE Giants fan. Like, he loves the Giants like I love pink. I'm not kidding. He was at the World Series and I knew he'd appreciate it, so....I bought it. No big deal. I'd do it for any friend, right? NO BIG DEAL. 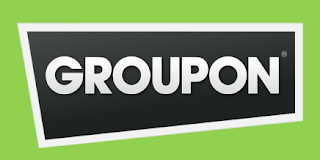 Now, this part is important (I don't know why, it just is). You see, I'd just like to point out that I didn't go looking for a present to get him, I just accidentally found something he'd like when I just happened to be on Groupon. See, there's a difference, right? It's not like I was looking, it was just there. Which, thereby negates it being a gift. See, we're all in agreement, right? Good. 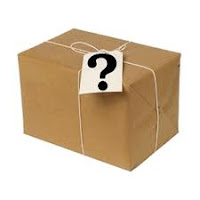 So, I bought the throw, it arrived, and I shipped it off to Neverending Boyfriend using one of those "Help Yourself" machines at the Post Office. Here's where I screwed up: I was re-using one of my Groupon boxes (did I mention I have a serious Groupon addiction?) and was removing all the stickers and tags on it to re-use. Because of this, there was too much tape and nowhere to put my return address. Since I used one of their pre-printed mailing labels, I thought this was sufficient. Yes, in retrospect, it was foolish, but whatever. The problem? I put the wrong zip code. I should have put 94133, but I put 94107. Here's what needs to be pointed out though: BOTH of these zip codes are for San Francisco, so I didn't really think my mis-step was that damaging. Boy, was I wrong. When he didn't get it after a week (it was supposed to arrive in two days), I went to the Post Office, where I was informed that my box had left San Francisco and was most likely now on its way to Dead Mail. Um, what? 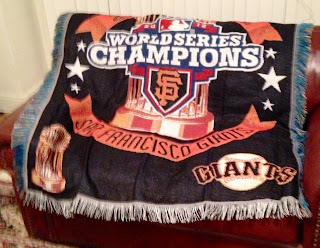 I mean, couldn't they just look up the "real" zip code and see where it needed to go? Hello, they have that service on THEIR website! What was the big deal? Anyway, I've been stressed to no end about this all week, thinking it was lost forever, but last night Neverending Boyfriend sent me a text with this picture of the blanket in his living room with a text that said, "I absolutely LOVE it! Thank you for that and the cards." HOORAY!! What a relief! Seriously, I was SO happy he got it! I was starting to think I'd have to go to the Dead Mail Center in Georgia and search through piles of mail (don't think I wouldn't). 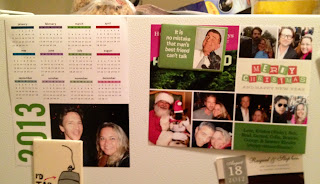 He also sent me a picture of his refrigerator with my card and calendar on it. Yes, I know, I'm pretty sure it means we're madly in love. Don't judge.
Posted by Pinky Lovejoy-Coogan at Tuesday, November 27, 2012